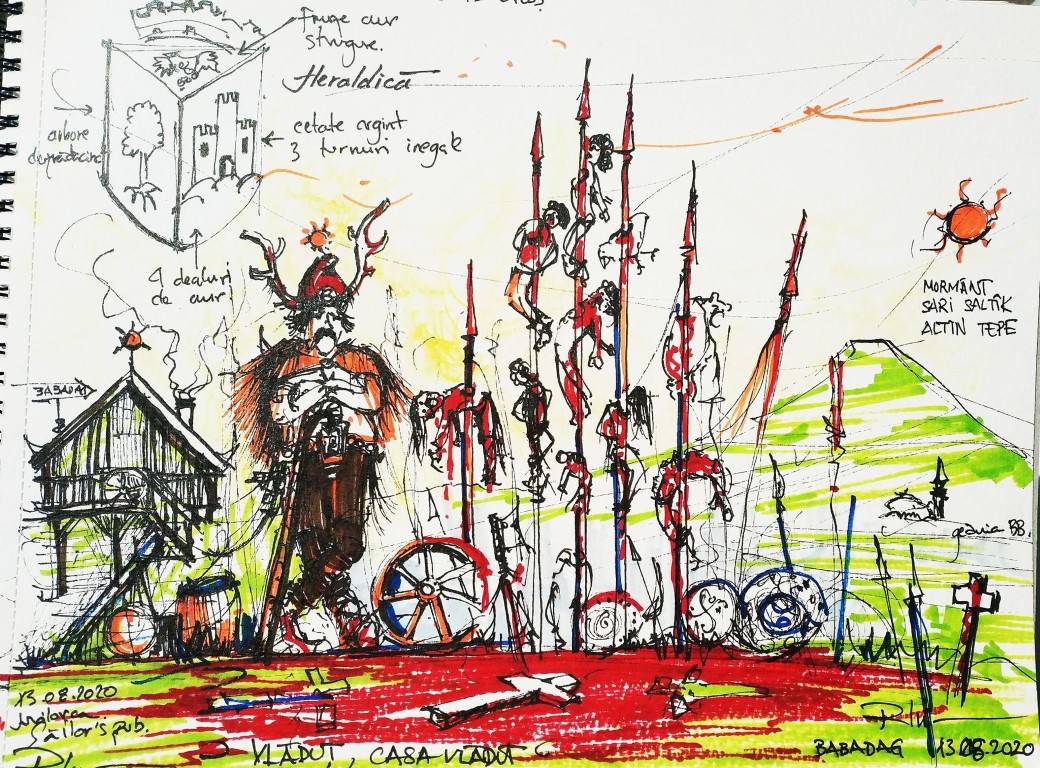 Heraldics and Impaling at …where else ? “Pensiunea Vládutz” 💛 in Babadag…
darling name for Vlád, derived probably from Vlad Țepés, historical romanian figure, ruler of the Southern Lands (Tara Româneascá) who was also nicknamed the “Impaler” or even “Vlad Dracul” or “Dráculea” (Devil) for his gruesome, evil yet effective ways of keeping the ottomans away from the country 🇷🇴, defending age-old traditions and his people …

I highly recommend the communist era movie “Vlad Dráculea”, especially the 5 minute scene in the church called “Vlad Tepes marturisind Dreapta Credinta” (Vlad … confessing the ‘Right’ faith) – a memorable philosophical dialogue between the Priest in the church and Vlad, reigning justice with godlike power, while making you think …how christianity mixed with our local spirituality. Lavinia once said that “If Vlad turned around the -other cheek- we would be speaking in Turkish now… #dacicways
[Spoilers included] 🧛‍♂️ https://www.youtube.com/watch?v=9Uph0KpVz8U

Tough times needed tougher solutions and Vlád was the one to do it. Sneaking up to his adversaries, going in or out the fortresses or monasteries undercover, using secret gateways that hallucinated enemies, disguised as beggar to spy on population and even attacking at night the ottoman camps for quick assasinations, ‘going medieval’ on their asses, hit-and-run situations … all were his specialty. If the “chivalry” code prohibited something, Vlád broke it and got away with it, as nothing would make him stop from his inner mission he felt, to defend, to serve, to protect the country and his loved ones.

Nobody actually knows where he is even buried or if he is still maybe alive, hiding, stalking and prowling from the deepest, darkest corner of our history…with his silver dagger gleaming in the night of your worst nightmare 🤭

No wonder he was such a source of inspirations for many legends connected with vampires that came tumbling down history channels and even made blockbusters by the likes of Bram Stoker, in his monumental epic “Dracula”. Bran Castle became Dracula Castle, Poenari Citadel became haunted Vlad Dracul Ghost Fortress in the Mountains, attractions started as “Dracula Park” etc. Even România became world famous with this PR Stunt or genious unwanted campaign of Bram Stoker, offending romanians and history, but generating huge worldwide interest, millions of people (such as dearest Ujin Ujin 🥰 ) just coming to România to check the facts from legends, see if vampires or werewolves exist and discover a beautiful wild, untamed country 🇷🇴

Untamed both in nature and human spirit, as corruption goes in our veins a long way, many Romanians inheriting the werewolf vampire ways of ancient dacian wolf people but the wrong way around, blood and money thirsty but eating each other unfortunately, instead of becoming United 🇷🇴 and start “eating” a common enemy… An unseen “virus” , an ideological-radical brain depleted army of zombies, “poverty” , hate, misunderstanding…

I agree with Mihai Eminescu’s lyrics here 🇷🇴 as the ‘madhouse’ …”used to be a fun house, but now is only made of evil clowns” / Pink & Eminescu
https://youtu.be/eZ5aEWxtAZk