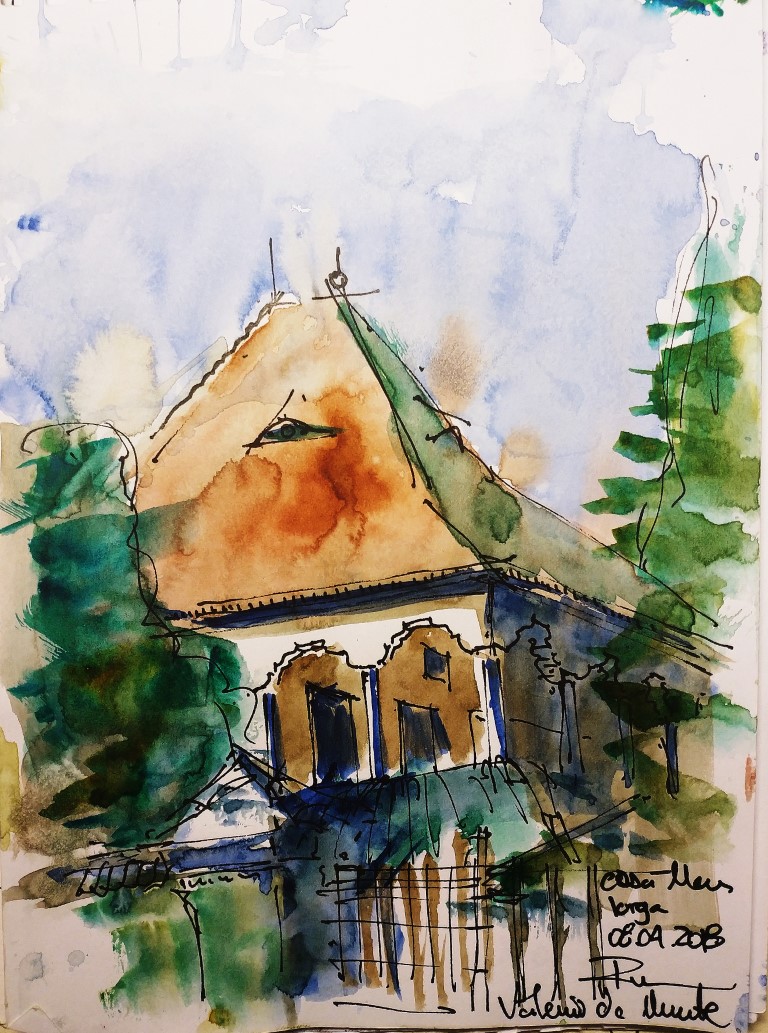 Exploring and researching the roots of your family can take you to Vălenii de Munte – a mountain village turned to city recently with architectural gems such as this one – the Memorial House of our great thinker and philosopher Nicolae Iorga, a titan of culture. However, as România’s shaken and earthquake history has got us used, even Nicolae Iorga had some nasty encounters from a philosophical point-of-view with the Legionary Movement led by fierce “Captain” Corneliu Zelea Codreanu. However, not ordered in by Codreanu, but Nicolae Iorga ended up assasinated by the “greens” and the rest is history, a deep, dark and still not understood fully even until today, the reason for many political unrest and society cacophonies still hitting us.

You can read more about the house here : https://www.monumenteprahova.ro/monumente-urbane-prahova/valenii-de-munte/category/341-casa-memoriala-nicolae-iorga

This movie, “Drumeț în Calea Lupilor” (Wanderer in the path of Wolves) is a total romanian cinematographical gem of the communist era, yet not very known about. It starts with the infamous tagline by Iorga himself : “Cine uită, nu merită” (He whom forgets, doesn’t deserve) – a powerful insight on the tendency of men to forget where they come from in their continuous run for the unknown, N. Iorga being a total encyclopedia of history, culture and romanian traditions, an ardent patriot with different views than many. An interesting fact about this movie is that the actor playing fierce Legionary commander Horia Sima (second in charge of the “Legion”, after Cpt. Corneliu Codreanu’s brutal assasination by king Carol II) actually did a great job impersonating the historical figure’, agitated and exalted style with impassionate speeches but a more cold-hearted, deadshot attitude than warm and charismatic Corneliu Zelea Codreanu, the fact that the Legion faded away from Romanian leadership prime to the mist of fascism tendencies, Marshall Ion Antonescu conflicts and Hitlerist Germany allegiance. Soon after the movie was finished, the actor became a monk, a really interesting fact because the Legion was indeed infused with many Orthodox and Christian themed rhetoric, the leaders being seen as saints and the ultimate vision depicted by Captain Codreanu was “Biruința Legionară” – the Romanian ultimate desire, end-goal of sanctifying the Country (“Ca soarele Sfânt de pe Cer !”).

My grandfather and his family lived somewhere around here, on 5 Mihai Eminescu street … but we could not locate precisely the house or the parcel. But the experience of the search was worth it. We only had my mother’ memory of hearing her family saying that “They could hear Iorga’s lessons from their porch” – maybe romanced a bit, since Eminescu street is kilometeres away from N. Iorga’s memorial house, but still … maybe we got something wrong and they could really hear the historical speeches.