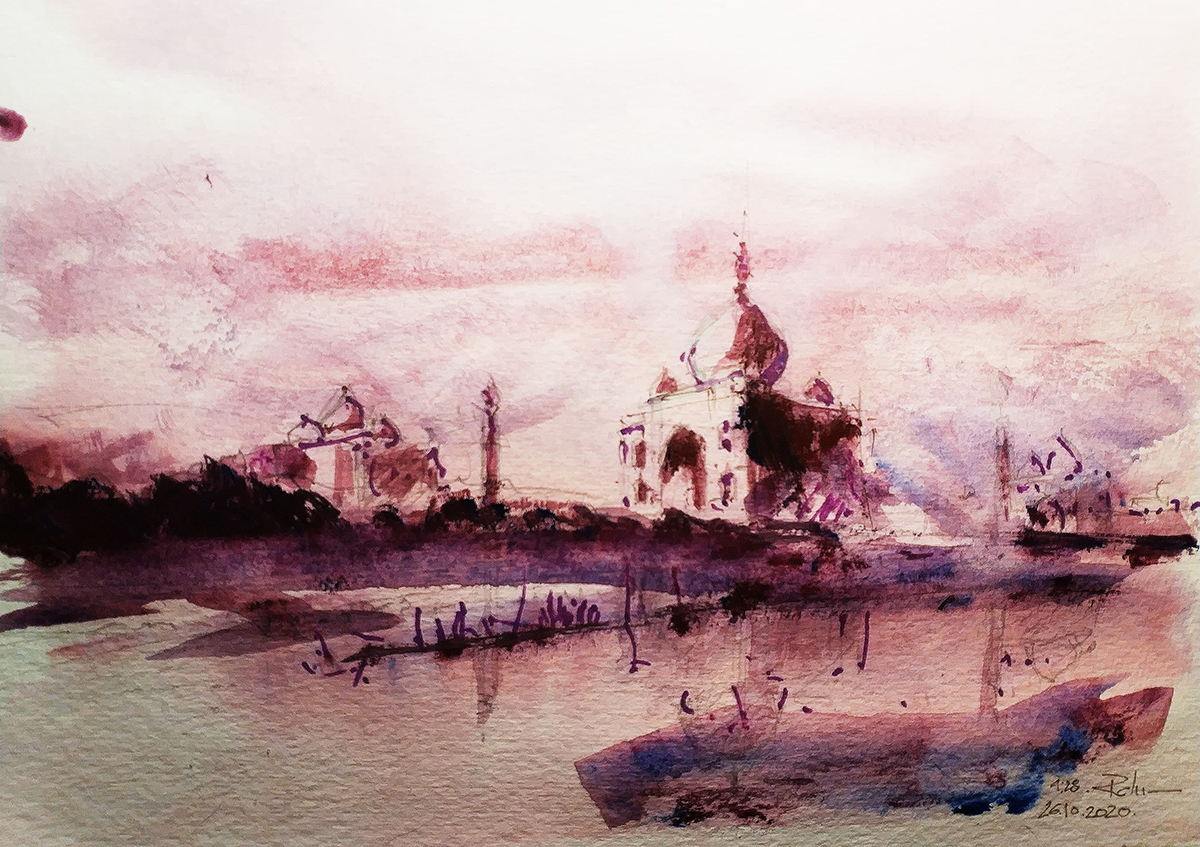 But I like more the romanian word “Asfințit” instead of the english “Dawn”. Because of this wonderful flexible language you can split the word into two smaller parts : “Asfințit” to “A Sfinți” that means “To Bless” or “He Blessed“, also meaning to “Die”, to “Sink” … maybe a metaphor for a change as the Ace of Spades if a symbol for “Death“, or 13th a Major Arcana of twisted destiny in fact, a crucial moment of revolution. I love all these dark aspects on life – of Ending the Old Ways, I even have a black-cat I named Tuesday 13th.

Actually this beautiful building that today is known for being a symbol for eternal love is the biggest Tomb ever. A “death” place, the best one.

Here, in Agra – India this Ivory White Marble Palace stands out in a gleeming purple shades, out of the mist … one of the most fascinating architectures with four slender minarets guarding the main dome and waterways reflecting the building day and night.

Not the most romantic place to take your girlfriend or wife to, as It is in fact a big grave, or a tomb.

Here is where the Mughal Emperor Shah Jahan buried his favorite wife Mumtaz Mahal. I never believed in the concept of soul-mate or “favorite wive” but this one woman was his best advisor, how to take military and political decisions, like a partner in deed and a wise counselor.

I find it a nice metaphor for all world’s prophets that have their time in the now countdown to extinction. Jesus Christ was a nice advisor and companion for many years … but where is he know ? talking people into becoming violent ? Where is he now in the United States, where is he in France where there are decapitations out of relligious misbeliefs ? Or in Romania where people get assaulted or beaten up for different views ?

Indians dont expect Jesus at the end of times, but Hari Hari (or Harihara, Ari) a powerful Supereme End God to call upon Shiva the Destroyer and Vishnu the Maintainer . Basically an all-in-one wonder. And the guys playing metal songs from India are basically, calling him … singing about “Enough is Enough – We are all One, Bridge the Gap between East and West”. Why wait for Jesus when we can have both Ari+Jesus and all in wonder like ATI ? To destroy everything.

“Divided we stand, United we Rule” , and … beside all the differences we are one

i found this gem while in Barcelona :